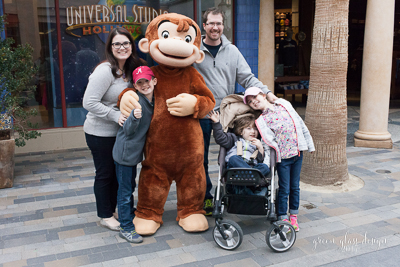 One of the things Joel and I desire is for our children to live without fear; with a terminally ill child, we have to balance the safety and immune protection he needs with the fact we want him to have the same experiences other children his age have. For us, that means we are going to take more trips, see more things, do more adventures. We cannot let Littlest’s frailty keep us cordoned off from giving the kids a full childhood, and we desperately want to build memories with him when he’s feeling well. So we are having 2017 be a Year of Adventure.

We kicked off January with a visit from Susanna, Joel’s sister. She came out after Christmas and spent two weeks with us, and we got one “tourist” thing in seeing Yosemite in the snow. She and Emily (younger sister) and I went down to Universal Studios as a Girls’ Day Away, and we had an all around awesome visit.

In February, Joel had work in the Los Angeles area, so we decided to surprise the kids with a visit to Universal Studios (since I had previewed rides Littlest could go on, etc.) and we had A BLAST watching the older two experience rides based on some of our favorite movies/books. Jurassic Park was a favorite of Littlest (not so much Quietest!) and Oldest *adored* Harry Potter and the Forbidden Journey. Quietest loved the Minion Mayhem ride, and all three loved Hogsmeade, a realistic setting from the Harry Potter movies where we could browse themed merchandise and sip on real butterbeer.

The day after seeing Universal Studios, we went and visited the La Brea Tar Pits and Mission San Gabriel Arcángel for a quieter more educational day. I had never been to the Tar Pits, and it was an amazing experience. From the jaw-dropping size of the Colombian Mammoth fossils they have been able to dig up, to the sheer numbers of Smilodon fossils they have recovered, we were in a science junky’s dream. Oldest was wowing all the employees who were sharing the experiences and touchable fossils; some things he nailed and some things he learned were “old science” and their discoveries there at La Brea have changed what scientists now believe about some of the species we saw.

When I was a girl, I remember taking a trip with my grandmother, mom, and three sisters to see a majority of the California Missions that are still standing; it was highly formative experience for me, I learned so much about the struggles of the Native American tribes of California, the Californios and their separate culture, and the various ways that missions shaped the dynamics and agriculture of the state I love.

Technically this was in March; but we renewed our memberships to the Fresno Chaffee Zoo. It’s by-far one of Littlest’s favorite places, and the pace can be slow or fast, depending on how he’s feeling. Plus with the amazing expansions they’ve put in, we always feel like there is something new or special when we go.